When Clarence and I were traveling through Asia with Encounter Overland, we camped in a field in Turkey across from the Greek island of Lesbos. We were new to the group, maybe a week in, and as we set up our tents and built a campfire, someone brought out a bottle of Turkish vodka.

Another someone found a package of tang and we started mixing drinks. It was on this particular night that my friends Lorna, Lynn, Peta and I started singing together. We were promptly dubbed the Lesbos sisters, and continued annoying the whole group for the next three months.

But on that night we were in fine form. As we drank our way through the bottle, we gradually ran out of tang. ‘It’s so smooth!’ we said. ‘You don’t even need mix!’ Some of the more sensible campers went to bed, but the Lesbos sisters remained behind, serenading anyone who happened to be in the area.

To quote the bible, there were shepherds living out in the fields nearby, keeping watch over their flocks at night. Like the sheepherders of old, they were drawn in by some angels singing; ie: the Lesbos Sisters. I can’t remember exactly when they joined us, but I have a pretty good idea why.

Folks,when I was twenty-four, there were some things about the world that I didn’t understand yet.

1. I have a meagre capacity for drinking alcohol.
2. I would miss these singing sisters for the rest of my life.
3. Drinking straight vodka makes you blind for a day.
4. Shepherds who want to show you their sheep are just like guys who invite you over to see their etchings. Or, in the case of my husband, their aquarium.

Fortunately, my sisters were watching out for me. I think it was Peta who dragged me back from the edge of a field and out of the clutches of some eager shepherds. And I’m sure that back in Flin Flon, my mother was sitting up in bed, crying, “Save her, God! She’s a bit of an idiot!” Apparently both she and Clarence’s mother wore out their knees with all the praying over our eight month vacation.

The next day, the others in the group got very tired of hearing me whine, ‘I’m blind! I can’t see!’ I’m almost positive there was some serious mockery going on right in front of my face. And who could blame them? For one thing, we drank all the tang. And I’m fairly sure the vodka was meant for bribing border guards and not for gilding the throats of our girl’s group.

Folks from that trip are having another reunion in England this fall, and I’m grieved we won’t be there. But expect more stories to come your way, my intrepid, beloved friends. They’re my way of saying that I miss you all.

And now, a photo of the Lesbos sisters follows this very appropriate song. 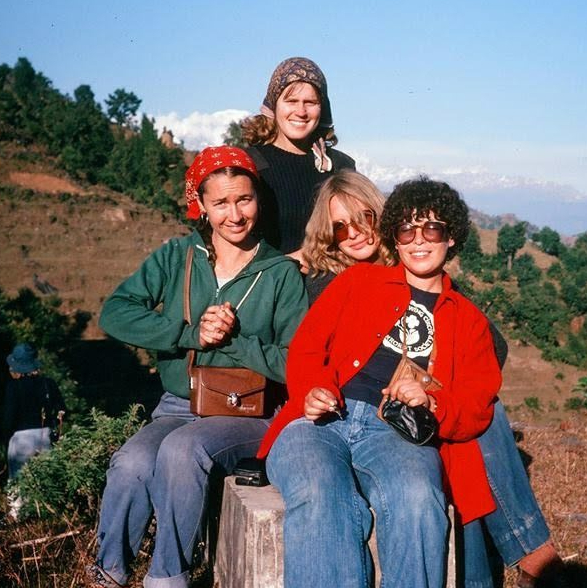 Judith Pettersen is an author living in Canada. She blogs about her life in the north and the ups and downs of being a writer. View more posts

2 thoughts on “Two Shots of Happy”