Beware of overconfidence. It can turn around and bite you in the derriere, or at the very least, leave you feeling betrayed by yourself. Here’s a small example. I am an excellent parallel parker. My mother taught me, as well as my driver’s ed teacher, and I got pretty good at it.

I’ve learned to be patient, and not pressure myself just because cars are waiting behind me on the street. I use my mom’s technique and can squeeze into the smallest spaces. I’ve been bragging about it for a few years. My daughter and I had to exchange vehicles for a week so she could haul some furniture. Our cars seem similar, but that doesn’t mean a thing when it comes to parking. My first attempt with hers put me up on the curb. My second left me a couple feet away from it with my car angled strangely. I felt shaken by this. What was happening? It turns out I was only good at parking MY car.

I tell you this as a lead up to my first unfortunate event. It started small, with my favourite backpack breaking just as I entered the Winnipeg airport. No big deal…I anchored it to my suitcase with a strap and was on my way. My next unfortunate event was a bigger deal. I was heading to Surrey for an International Writer’s Conference and my plane was due to leave at 11:50. My sister Linda watched me having a leisurely breakfast…it was just after nine…and said, “Why aren’t we driving to the airport! You’re going to be late!”

“I’ve already checked in. I’ll get there an hour ahead and be fine. I’ve never missed a flight in my life, so chill.” In this way I was reminding her that while she’s still older, she’s not the boss of me anymore. I got to the airport 70 minutes before my flight time, and went to print my luggage tag.

‘You cannot check in for this flight,’ was the message on the machine they make you use because they prefer to hire less people and have lots of cash left over for their shareholders. The same reasoning applies to the tiny seats all regular folks are obliged to sit in. It’s today’s version of traveling steerage at the bottom of the ship. Anyway.

I headed up to the counter and was told that my flight was leaving in a few minutes and I had missed my chance. I pulled up my phone to show the man behind the desk that he was wrong, and I could prove it. I showed him the flight on my phone, and he said, “Yes. Like it says, your flight leaves at 10:40.” My first words to him?

“Oh no! My sister was right!” I said, and continued babbling hysterically. “Now my children will lose faith in my ability to run my own life!” I had been proud of how I’d been doing without my husband, who always took charge of our travel itinerary. It was true that he’d missed a few flights himself, but in that moment it didn’t matter much.

The ticket agent found me a new flight, though it cost me some more money, but he didn’t charge me for my suitcase. He also told me to lie to everyone and blame Air Canada, which I thought was very noble. “This happens all the time,” he said.

He’s right. What a life lesson. Somehow I’d convinced myself of the wrong time, and my sister, whom I’d correctly informed a few months before, had stored the info in the reptilian part of her big sister brain. Linda was right. Apparently, she’s still the boss of me after all.

But then he said this. “I guess the Force just wasn’t with you today.”

“What?” I asked this very loudly. “The Force is always with me! Don’t mistake stupidity for not having the Force! Sheesh!” His hands went up defensively, and then he gave me a better seat for free. Anyway.

All went well after that, until day one of the conference when I had to pitch my novel to an agent. Now full of self doubt, (I can’t park, I can’t get to the airport on time) I didn’t know what to do. Ordinarily, I wing my pitch, outlining the theme and storyline plus giving a short bio. This time I headed straight for the bar, ordered a shot of tequila and wrote the whole thing out. I felt a little better as I marched into my appointment. The first thing I said was, ‘I’ve had a shot of tequila and written my pitch out. Can I just read it?’ She said yes, not changing expressions. These agents have to be fearless…they never know what kind of kook will be standing in front of them, begging for a chance. In the end, she decided to take a look at my novel, upping my chances of representation from zero to 1%. Filled with joy (but not self confidence) I hastened to give my daughter the good news.

That night would be a celebration. There was a banquet with the theme, ‘It was a dark and stormy night,’ and apparently everyone would be wearing costumes. I’d brought the one I’d used for the Rocky Horror Picture show, thinking I could make up a suitable story about my character. In the end, I looked like a vampy hooker having her own dark and stormy night, because less than a quarter of attendees dressed up. The ones that did were wearing raincoats, or carrying lanterns. There was the odd cute mask, and some cool vintage costumes as well as one woman who dressed like a crow. It was very Moira, ‘The Crows Have Eyes,’ from Schitt’s Creek. My daughter wore a cape and mask, and there was I, looking like someone who couldn’t charge much for her services. Ironically, this was the outfit that spawned my last blog, ‘If Bras Could Talk.’

We were not staying at the host hotel and I couldn’t change my outfit, so I just barrelled through dinner and the cocktail party that followed. Fortunately, writers are a quirky lot and I can’t help feeling at home with them. Agents are basically the same. Many of them are writers or deal with them every day.

The last unfortunate event ( at least I hope so, I’m still on the road) meant missing all of Sunday’s events because I’d booked my leaving flight too early. So consider me humbled and feeling like I’m thirteen years old again. But since I write young adult fiction, that might not a bad thing. 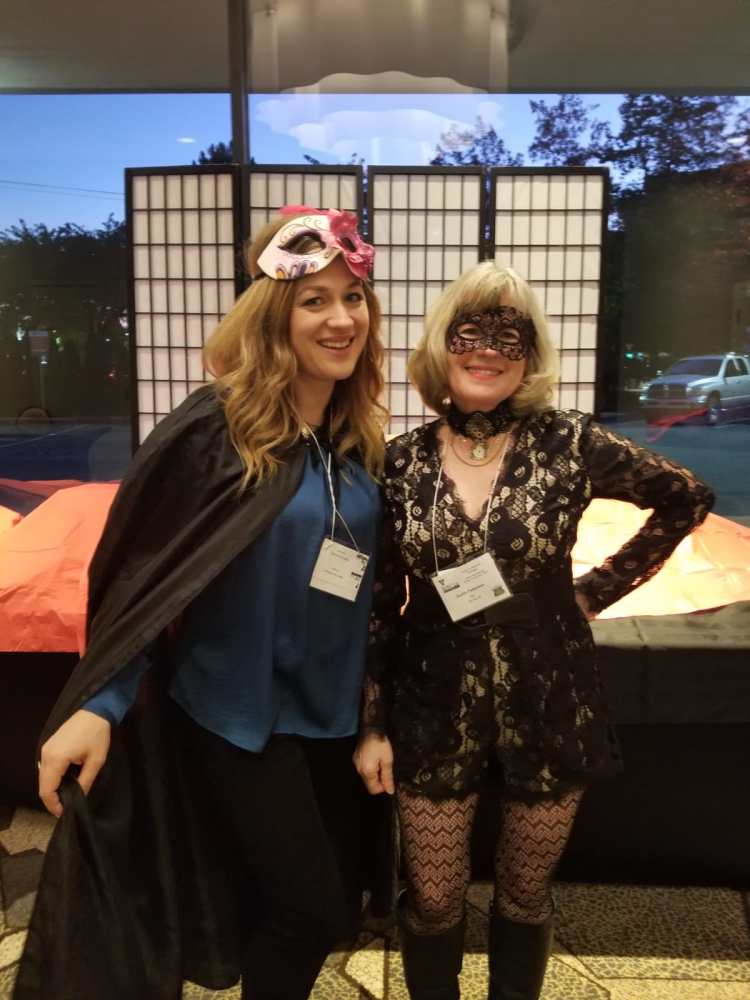 Judith Pettersen is an author living in Canada. She blogs about her life in the north and the ups and downs of being a writer. View more posts

4 thoughts on “A Series of Unfortunate Events”